Unless you’ve been without Internet or TV for the last year or so, you’ve probably heard of Pinterest- the social networking site that allows users to group images and “pin” them to a virtual bulletin board. Many people use Pinterest to save pictures of their dream homes, but the site is also a great source for DIY ideas. With a little bit of creativity and the ideas below, you can clean and freshen your home, and update its look while saving money and time.

Use Baking Soda in the Garden and in the Home 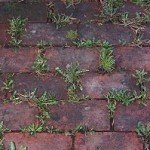 Adding baking soda to garden soil neutralizes its pH, preventing vegetation from growing. Sprinkle baking soda in a six-inch wide strip around flower and vegetable beds to prevent weeds and grass from creeping in. For a green floor cleaner, mix ¼ cup baking soda, ¼ cup white vinegar, a tablespoon of dish detergent, and two gallons of warm water. It will remove dirt and grime without the need for harsh-smelling chemicals.

Hide an Unsightly Shower with a DIY Curtain 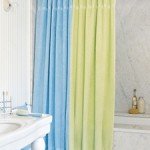 If your shower door has been taken over with soap scum, or you’ve got tile that’s been there since the 70s, you don’t need to break out your Teng tools to replace it. Make your own curtain like this: use white terrycloth (for easy washing), and accent it with grosgrain ribbon in a color that matches the rest of your bathroom decor.

Dress up a plain shower curtain rod with decorative spray paint, and buy some good drapery rings from your local home improvement store. There you go- you’ve brightened up your bath for less than $20.

Make Your Own Glow Sticks 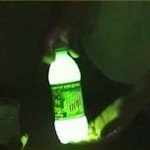 Mountain Dew isn’t good for your waistline or your teeth, but it does have another use. Glow sticks!

Leave about ¼” in the bottom of the bottle, and add a small amount (about a teaspoonful) of baking soda. Add three capfuls of hydrogen peroxide, screw the cap on the bottle, and shake. This solution can also be used as glow-in-the-dark paint. 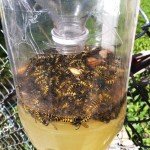 Wasps can be a pest if you’re doing things outdoors in the summer time. To trap wasps without harming beneficial bees, here’s what you’ll need:

Use your tools to cut the top from the bottle (you’ll end up with a funnel-shaped piece). Turn it upside down, and put it in the other half of the bottle. Mix the sugar, salt and vinegar together and pour into the funnel. The sweet/sour scent attracts wasps, which will crawl into the inverted bottle neck and be unable to escape.

Some people may view sites like Pinterest as a meaningless time-waster, but nothing could be further from the truth. We found all of the ideas above, plus many more on the site. Why not take a look- maybe you’ll find the inspiration for your next craft, gardening or home DIY project!