Interior Railing Before, During, and After

Home/Before and After Photos, Interior Projects/Interior Railing Before, During, and After
Previous Next

Interior Railing Before, During, and After

When building an interior railing, you will have a few choices.  the choices that you make will have a big impact on the final appearance (obviously), but will also have a major impact on the time to build.  If you don’t to many stair railings, you probably don’t have some of the custom tools that make the job easier. On top of that, you won’t have the knowledge needed to avoid mistakes and make the job easier.  From the newel that you select to the baluster and finish, a stair can be tricky.

Our recent renovation was formerly a 1 family home that was converted to a 2 family home many years ago.  The conversion to a 2 family was minimal, so bringing it back to a single family was not a major job. In fact, the separating wall that was built at the staircase was only 3″ thick.  The following is a picture of the staircase after demolition of the dividing wall (with some new 2×6 framing added for the newel/railing structure).  You can see that we built a solid framework for our newels and bolted them in from the backside (we had to cover the panels from 1889 as they were unusable).  Click on the image for a larger version of the before and after stair railing pictures. 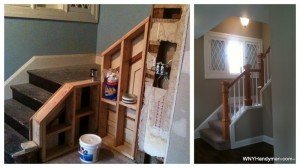 Our railing was built from the ground up, this is often easier than a remod.  We had a very specific look that we wanted to achieve and a standard newel wasn’t going to cut it. We went with a beefier newel post that is 5″ at its widest and 4″ at the narrow points. This gives a real custom (and older style) look.  It was a bit of a search to find the box newel post.

In building out this stair rail, I walked away with 2 tips.  If you are working with multiple elevations that will transition with a newel, the less detail on the newel, the better.  A detailed newel can limit the railing position when you transition to a new elevation.  Another tip that we learned the hard way was to use a baluster (spindle) that is squared at the top and bottom. This will allow for easy cuts and fitting.  Our original plan called for a pin top. Since we didn’t have the boring jig to ease the job, we altered the plan to use a spindle that was square at the top and bottom.

The before picture doesn’t really seem to fit.  The explanation for this would be the dividing wall that blocks the stair along with the closet, basement door and interior entry door for the lower unit. 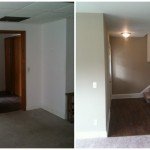 Entry hall before and after

The end result turned out terrific.

By WNY Handyman|May 11th, 2011|Before and After Photos, Interior Projects|3 Comments