A Skate Ramp for my Son

A Skate Ramp for my Son

Talk about a fun project. What 8 year old wouldn’t want a skateboard ramp in his garage? 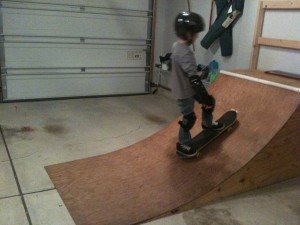 You might think that is is crazy, but I would rather supervise my son’s reckless behavior than let it happen elsewhere.  This project came about when my son become more interested in skating. We visited a couple of skate parks and found that the ramps were a ton of fun.  A little dangerous, but fun.

I found a simple ramp plan at http://www.xtremeskater.com/ and decided to surprise my son on his birthday.  I had enough material at a project house and put it together in a couple of hours.  I surprised my son by bringing him to the project house and asking him to help uncover some material that was in the driveway.  Boy was he surprised!  He ran up to the top and hugged “his ramp”.

Everyone asks about bending the ply. I probably could have done it over time by allowing the ply to get wet and using some weights for a week or two. I didn’t have the time so I simply made some kerf cuts about 1/3 of the way through the backside of the sheet and bent along those.

Finished project (prior to the upper railing and the decals and spray painted stencils):

Now that we have this, my son is asking when the other pieces for his skate park will be built.